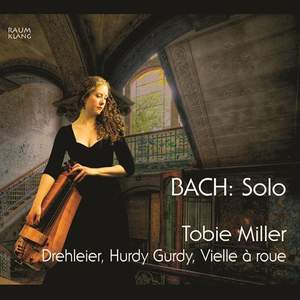 Johann Sebastian Bach’s music has been a leitmotiv in Tobie Miller’s musical life, which is why it was her big dream to adapt his wonderful solo works for the hurdy-gurdy. If Bach knew this instrument, it was most probably as a peasant’s or beggar’s instrument. However, during his lifetime, the hurdy-gurdy was a favorite instrument of the French upper classes.

For this recording, Tobie Miller employed historical fingerings and playing techniques, which are described in great detail in French tutors of the eighteenth century. In addition, she “borrowed” playing techniques of other baroque string instruments: for example, pizzicato as well as the forward and backward movement of the crank to imitate the detached articulation of a violin.

The Canadian singer, hurdy-gurdy and recorder player Tobie Miller is recognized today as an outstanding virtuoso on the baroque hurdy-gurdy, and performs in a number of ensemble formations, including in duo with the Austrian hurdy-gurdy player Matthias Loibner, but also with well-known conductors such as Jordi Savall, Christophe Coin, and Wieland Kuijken. In 2017, together with Ensemble Danguy, she released on the Ricercar label the highly acclaimed CD La Belle Vielleuse, featuring eighteenth-century hurdy-gurdy sonatas.