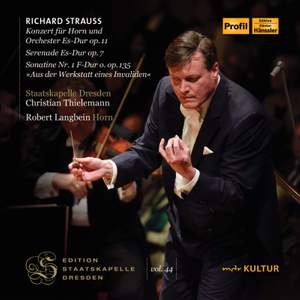 Strauss’s early horn concerto Op. 11, which he intended to be accompanied by either orchestra or piano, is far more than a mere audition piece. Strauss’s first biographer Max Steinitzer described op. 11 as 'beautiful in its form', 'brilliant' and 'appetising', making special reference to the lyrical sentiment and song-like nature of the thematic and motivic progressions, which eclipse the actual development of such themes. The 2018 / 2019 season is Christian Thielemann’s seventh as Principal Conductor of the Staatskapelle Dresden. Following engagements at the Deutsche Oper Berlin, in Gelsenkirchen, Karlsruhe, Hanover and Dusseldorf, in 1988 he moved to Nuremberg to occupy the post of General Music Director. Christian Thielemann has contributed to the birthday celebrations for Richard Wagner and Richard Strauss with numerous Staatskapelle concerts in the Semperoper and on tour. His programmes have also featured a wide range of music from Bach to Henze, Rihm and Gubaidulina.

Langbein’s lyricism and panache suit [the First Horn Concerto] down to the ground, while Thielemann’s conducting is admirably taut yet supple. It’s a superb performance…[in Metamorphosen] Thielemann adopts spacious tempos throughout…though the performance gradually gains in power and momentum as it goes, and its cumulative impact is considerable. The playing is impeccable, both in its richness and detail.

A memorable addition to a valuable series.