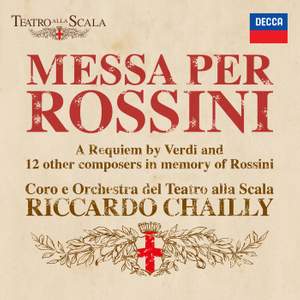 Only hyper-specialists will recognise the composers’ names…The results are varied, ranging from the barely competent to the pretty interesting, but of course Verdi dwarfs them with the Libera... — BBC Music Magazine, March 2019, 5 out of 5 stars (Performance) / 4 out of 5 stars (Recording) More…

“To honour the memory of Rossini I would like the most distinguished Italian composers to compose a Requiem Mass to be performed on the anniversary of his death.”

Giuseppe Verdi 2018 also marks 250 years since Gioachino Rossini’s death in 1868. ‘Messa per Rossini’ was composed in his memory by Verdi and 12 other notable Italian composers Verdi himself composed the concluding Libera me, which he later used in his own ‘Messa da Requiem’ This rare recording represents the work’s triumphant return to the spiritual home of Verdi and Rossini: the Teatro alla Scala in Milan.

Only hyper-specialists will recognise the composers’ names…The results are varied, ranging from the barely competent to the pretty interesting, but of course Verdi dwarfs them with the Libera me…This is a fine account, too, with Riccardo Chailly showing that he has become the leading contemporary exponent of the music of that time and place.

Not every contribution to this multi-authored memorial to Rossini may be in the same league as Verdi’s Libera me (later upcycled for his own Requiem), but Chailly and his La Scala forces treat every phrase with such blazing conviction that the patchwork score comes across with real coherence; highlights include Antonio Bazzini’s shamelessly operatic Dies Irae and tenor Francesco Meli’s impassioned solo in Alessandro Nini’s Ingemisco.

Chailly’s Scala forces give the 13 movements their all...it’s a fascinating testament to a historical event that never was. Verdi’s movement for soprano and chorus is the best music here, justifying his decision to write his own Requiem

The beauty of this recording is the exceptional standard of choral singing from the chorus of La Scala, under Riccardo Chailly. The five soloists are not so inspiring, though Maria José Siri does rise to the soprano demands of the Libera me.