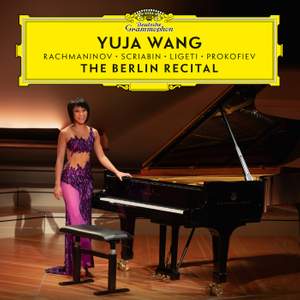 Yuja Wang’s philosophy of music is both simple and profoundly complex. “I want to relate all life to music,” she recently told veteran British critic Fiona Maddocks. The Beijing-born pianist’s latest album for Deutsche Grammophon, set for international release on 23 November 2018, captures the white heat of solo works by Rachmaninov, Prokofiev, Scriabin and Ligeti, a trio of Russians together with one of the late 20th-century’s greatest composers. The Berlin Recital was recorded live this summer at the Berlin Philharmonie’s Kammermusiksaal during Yuja’s extensive solo tour of North America and Europe. The Yellow Label also recorded her sublime series of Berlin encore pieces to form a separate EP, which spans everything from the riffs and roulades of Nikolai Kapustin’s jazz-tinged Toccatina to Earl Wild’s sonorous transcription of the Pas de Quatre from Tchaikovsky’s Swan Lake.

A supremely intelligent, deeply feeling artist of the first order.

In the first of her two C minor Études-tableaux she is as tempestuous and temperamental as the music demands: some might even say more than it demands. But she never loses her head, and her colours are original without being wilful…[In the Ligeti] Wang offers a tour de force of quasi-orchestral detail…Anyone hitherto more put off than drawn in by Yuja Wang’s glamorous image may have to do some rethinking in the light of this recital/ Fabulous piano sound, too.

In this intelligent, sensibly compiled programme, works by György Ligeti are a triumph...Ligeti’s Étude No 3 ‘Touches bloquées’ captures the cosmic reach of the Hungarian master, evoking unstoppable noises of the universe. One feels that Ligeti himself would have revelled in this performance. In other highlights, Scriabin’s Sonata No 10, Op 70 has a spectral quality that reflects much focus on sound texture.