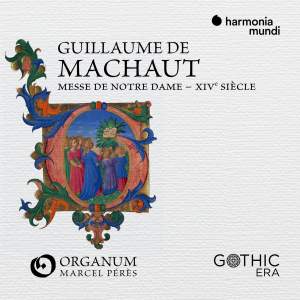 As a ‘craftsman of the old and the new forge’, Guillaume de Machaut contributed to the tradition of his famous predecessors such as Adam de la Halle and Jehan Lescurel in laying the foundations for an aesthetic with an illustrious future, the Ars Nova. His Messe de Nostre Dame, the first complete mass cycle whose composer is known, forms the quintessence of the renewal of sonorities and rhythms which marked the 14th century in France and Italy.

This is a compelling, richly ornamented account of the earliest known polyphonic mass by a named composer; exquisite, otherworldly harmonies and eternal words, delivered with clarity, passion and immediacy by Ensemble Organum.