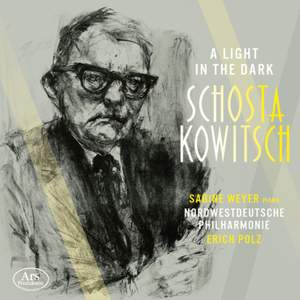 Shostakovich: A Light In The Dark

This SACD combines three works by Dmitri Shostakovich, which do not correspond to the cliché of the composer suffering under the Soviet cultural doctrine. The works featured on this SACD are Festliche Ouvertüre A-Dur op. 96, Klavierkonzert Nr. 2 F-Dur op. 102 (Sabine Weyer Piano) and Sinfonie Nr. 9 Es-Dur op. 70. While the almost neo-classical ninth symphony refuses any bombast, the two later works show more optimism. No wonder: Stalin was dead, the composer had survived all threats.