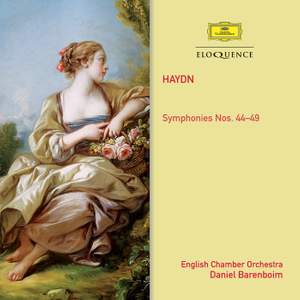 Daniel Barenboim had been conducting the English Chamber Orchestra for 20 years when he made the first of the three Deutsche Grammophon LPs newly remastered and compiled on this Eloquence reissue. The familiarity tells in the crisp and dynamic response of the ECO to Barenboim’s elegant and idiomatic leadership. Without recourse to the bright and individuated instrumental textures of period instruments – a performing philosophy he has always shunned – Barenboim vividly outlines the knife-edge drama of the ‘Trauer’ Symphony (No. 44), the horn-led festivity of the piece dedicated to the Empress Maria Theresia (No. 48) and the unpredictable twists and turns of the ‘Farewell’ (No. 45).

Deprived of memorable nicknames, Nos. 46 and 47 have never achieved the renown of the other four symphonies composed around the turn of the 1770s, yet Barenboim is alive to their revolutionary qualities. Haydn was no hide-bound conservative but one of music’s great innovators and experimenters, exemplified by the palindromic ingenuity of No. 47’s Minuet and Trio and the subtle, proto-Minimalist rhythmic patterning of the symphony’s not-so-slow movement.

While Barenboim has since become renowned for his broadly conceived interpretations of Bruckner and Wagner, the forward drive and relentless energy of No. 49 (‘La Passione’) belong in spirit to the early recordings of Mozart concertos and Beethoven sonatas that propelled him to international fame as a prodigiously gifted young musician. Made in studio sessions in 1975 and 1978 in Edinburgh and London, these recordings combine the best of ‘old’ and ‘new’ approaches to Papa Haydn at his least Papa-like.

‘The “Farewell” is downright revelatory in terms of that frequently misjudged work’s substance and depth … [No.48] is irresistibly attractive in DG’s splendidly open sound … there cannot be more than a handful of Haydn symphony records from any source as stimulating and pleasurable as this one.’ Stereo Review, March 1980

‘A few more recordings like this could make us forget that Barenboim started out as one of our most promising young pianists … These performances are crisp and bright, and the attendant clarity is achieved with seeming ease… Highly recommended.’ Fanfare, November 1981