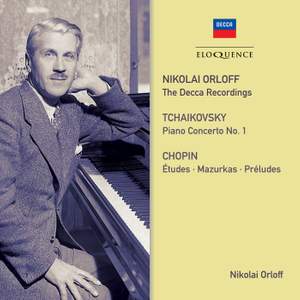 Nikolai Orloff is past his best, though there are some tender moments in Chopin’s less demanding pieces. Good orchestral shaping from Anatole Fistoulari. — BBC Music Magazine, March 2019, 2 out of 5 stars

No. 6 Lento assai in B Minor

A student of the legendary pedagogue Konstantin Igumnov, Nikolai Orloff became a professor of piano himself at the Moscow Conservatoire in 1917, at the age of just 25. Having emigrated to Paris in 1922, he soon began to make appearances in the UK which attracted a string of glowing reviews. ‘Everything was strong and yet amazingly supple,’ according to a Times review of Orloff at the Wigmore Hall in 1925. ‘His capacity for striking swiftly and cleanly with the exact strength and resilience was tested over and over again … Altogether, we have not heard such a remarkable achievement on the piano this season.’

Orloff became particularly associated with the music of Chopin and so it was natural that this was the composer he took into the Decca studios at West Hampstead in the autumn of 1945. By then his powers had somewhat faded, but one Gramophone reviewer in August 1947 still felt confident of placing the pianist in the company of Chopin greats such as Lipatti, Malcuzynski and Solomon.

In front of an orchestra, with the likes of Barbirolli and Damrosch at the helm, the First Concerto of Tchaikovsky had been another signature work for Orloff during the 1930s. Again, it is apt and fortunate that, in the absence of a more comprehensive record of his artistry, this should be the work he recorded with the London Symphony Orchestra and Anatole Fistoulari, who had established a reputation as a Tchaikovsky (and ballet) specialist. As the piano scholar Jonathan Summers identifies in his invaluable booklet essay, Orloff’s approach to this often mistreated warhorse is more focused on musicality, tone and poetry than speed and drive. There is still plenty of fire, particularly in the last movement, though it is paired with a gracefulness rarely encountered in today’s performances of this work.

Transfers from the original 78s have been undertaken by one of today’s leading remastering engineers, Mark Obert-Thorn, making this issue an essential acquisition for pianophiles.

‘Beautifully played and recorded with all fit gentleness … The player’s feathery lightness in the studies, and his ease of rhythm – no hurry or flurry – please me keenly. I like the scale of things.’ Gramophone, April 1948 (Chopin)

Nikolai Orloff is past his best, though there are some tender moments in Chopin’s less demanding pieces. Good orchestral shaping from Anatole Fistoulari.