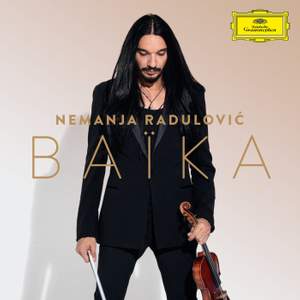 A fiery whirlwind of an album from the virtuosic Franco-Serbian violinist: the Khachaturian violin Concerto and new takes on Scheherazade are fabulous showpieces. — BBC Music Magazine, March 2019, 5 out of 5 stars More…

1. The Sea and Sinbad's Ship

2. The Legend of the Kalendar Prince

4. Festival at Baghdad. The Sea. Ship Breaks upon a Cliff Surmounted by a Bronze Horseman

Khachaturian: Trio for Clarinet, Violin and Piano in D Minor

After his exciting journey into the musical tradition of Eastern Europe (Journey East), the Baroque Sound-scapes of J.S. Bach (Bach), the Russian melodies of P.I. Tchaikovsky (Tchaikovsky), Nemanja Radulovic now embarks on a musical journey through the Orient – from Armenian reality to Persic daydream.

Nemanja’s a personal approach when creating an album is essential. The Serbian word “Baïka” translates to “tale” or “fairytale” and was chosen by him personally, because everything on this album feels like “Baïka” to him.

Commissioned for Nemanja’s ensemble Double Sens, Serbian composer and arranger Aleksandar Sedlar re-visited the fate of Scheherazade, queen and storyteller of One Thousand and One Nights. His composition is based on the Scheherazade Suite Op. 35 by Nikolai Rimsky-Korsakov and intriguingly recounts tales and treasures from the centuries-old epos. There will be a music video of the 1st movement.

To record Aram Khachaturian’s violin concerto Nemanja chose Borusan Istanbul Philharmonic Orchestra conducted by Sascha Goetzel, a pairing that already follows a successful collaboration on stage. The beautiful concerto is performed and recorded very rarely, which may be blamed on its virtuosity. Nemanja is considered as the current specialist of this work, adding a very personal and individual interpretation.

The Borusan and its conductor brilliantly complement his approach with their own dynamics and give the work that particular oriental flavor Nemanja wanted to reach with his recording.

The album includes another masterpiece by Khachaturian, which is the Trio for clarinet, violin and piano. The link between the violin concerto and the trio is obvious, as the clarinet also holds a prominent place in the concerto. As with the above recordings, Nemanja chose to record the trio with accomplices with whom he likes to perform on stage – the clarinetist Andreas Ottensamer and the pianist Laure Favre-Kahn.

To complete this recording, Nemanja chose to also work with Aleksandar Sedlar not as an arranger only, but as a composer: Savcho III is the transcription of a movement of the concerto for saxophone and orchestra for Nemanja and Double Sens, with traditional and festive melodies.

A fiery whirlwind of an album from the virtuosic Franco-Serbian violinist: the Khachaturian violin Concerto and new takes on Scheherazade are fabulous showpieces.

Immediately one notes the bite of the Borusan Istanbul Philharmonic under Sascha Goetzel and Radulović’s gritty tone as he digs into the five-note opening motif [of the Khachaturian]. However, this is no power drive through the concerto. Radulović can be aggressive, with plenty of fire in his double-stopping, but he never pushes the dynamics too hard…The couplings are imaginatively chosen…With Nemanja Radulović as narrator, this is an album with entrancing tales to tell