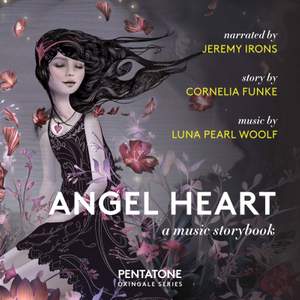 Jeremy Irons is the captivating narrator in this gorgeous fairytale, accompanied by beautifully arranged songs, familiar and newly-minted. — BBC Music Magazine, March 2019, 4 out of 5 stars

Pt. 1: Chapter 3a, Ah, How Rahmiel Loves the World of Men and Beasts!

Pt. 1: Chapter 5a, Rahmiel Fills the Night with Laughter

Pt. 2: Chapter 8a, The Witch That Can Heal Broken Hearts

Pt. 2: Chapter 12b, The West Is Even Bigger Than the Raven Man

Pt. 2: Chapter 13b, When the South Sings Her Lullaby

Exquisite images by the award-winning creative studio Mirada unfold the tale, and the boxed CD-and-story package includes a colouring poster, stickers and cards for sharing the magic. Originally released in 2013, and accompanied by premiere performances in Los Angeles and at Carnegie Hall in New York, this is the first international release of Angel Heart. "Angel Heart is a story designed to slip straight into the imagination of a young mind," says The New York Times, "it has both the simplicity and the dark undertow of a fairy tale." A forthcoming German version of the album will feature narration by the author.

Jeremy Irons is the captivating narrator in this gorgeous fairytale, accompanied by beautifully arranged songs, familiar and newly-minted.