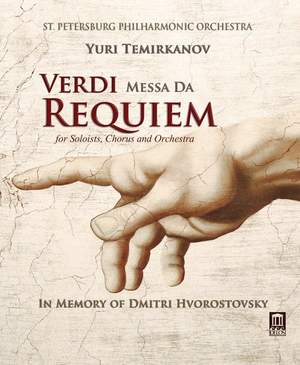 At 81, Temirkanov secures a sensitively shaped and dignified rather than theatrical account. Tempos are steady, even at times slow…Still, the orchestral playing is often thrilling, with a particularly... — BBC Music Magazine, February 2019, 4 out of 5 stars (Performance) / 3 out of 5 stars (Picture and Sound) More…

In the wake of the beloved Russian baritone Dmitri Hvorostovsky’s untimely passing in November 2017, tributes, memorials and musical event dedications have flowed non-stop. But none thus far has matched the sheer scope, power and sonic splendor of this all-Russian performance of Verdi’s blockbuster Requiem Mass. The all-star cast of soloists—soprano Dinara Alieva, mezzo-soprano Olesya Petrova, tenor Francesco Meli and bass Dmitry Belosselsky—sing their hearts out for Dmitri, under the baton of the vaunted Maestro Yuri Temirkanov leading the St. Petersburg Philharmonic Orchestra and the Bolshoi Theater Chorus. The result is an incredibly heartfelt and moving musical tribute to one of the greatest baritones who has ever lived.

At 81, Temirkanov secures a sensitively shaped and dignified rather than theatrical account. Tempos are steady, even at times slow…Still, the orchestral playing is often thrilling, with a particularly secure brass section and a range of colours that includes the most subtle and delicate – something that applies equally to the Bolshoi Theater Chorus whose operatic style is entirely apt for this work. The soloists form an even quartet.