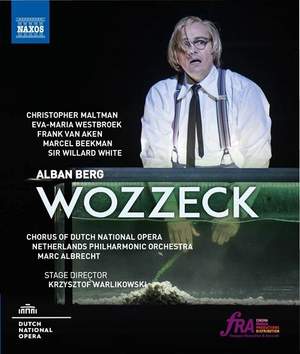 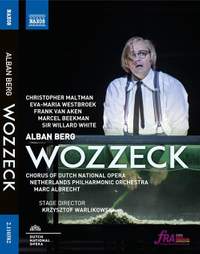 Based on real events and drawing on Georg Büchner's revolutionary play, Alban Berg's Wozzeck turns a grimly tragic narrative of violence and murder into one of the most powerful and original operas of the 20th century. Berg's uncompromising portrayal of brutality and madness generated much controversy, but the significance of Wozzeck was soon recognised; its compelling lyrical expansiveness, large-scale dramatic gestures and remarkable musical structures producing music of overwhelming emotional intensity. The Financial Times declared this to be 'a beautiful, moving, engrossing production… this is a consummate Wozzeck, blending clarity, lyricism, compassion and crushing force.'

Maltman is a marvellous Wozzeck, his big, warm baritone encouraging our insight, understanding and compassion, as well as conveying a sense of the character’s repressed strength. Eva-Maria Westbroek sings with steely beauty, precision and power to present a complex, intelligent Marie…This is playing of an admirably sumptuous kind – robust, sensitive, colourful, transparent, beautifully weighted and finely shared.

Maltman and Westbroek have both found hugely rewarding roles for their talents, and Marc Albrecht conducts with a blend of precision balanced with an almost bel canto grace.