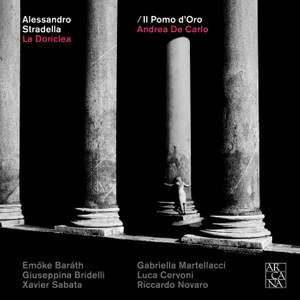 Emőke Baráth is a feisty Doriclea and nowhere more so than in her encounter with Xavier Sabata’s Fidalbo in Act II. But it’s Gabriella Martellaci’s rich contralto as the worldly-wise Delfina... — BBC Music Magazine, March 2019, 4 out of 5 stars More…

Alessandro Stradella’s place in the annals of the history of music is not only due to the adventurous circumstances that marked his brief existence, but also to the reputation as a opera composer he has acquired since the 18th century. Inaccessible for many decades to specialists and scholars, La Doriclea is definitely the least known of all Stradella’s operas. However, it constitutes a particularly significant chapter in his overall output: composed in Rome during the early 1670s, to our knowledge La Doriclea represents the first opera entirely composed by Stradella. From the dramatic point of view, La Doriclea belongs to the comedy of intrigue genre typical of the 17th century Spanish theatre tradition. Refined and amusing, it alternates touching lamentos with irresistibly comic scenes, in which the character of Giraldo, a veritable precursor of the basso buffo, allows us to glimpse Rossinian atmospheres.

This world premiere recording of La Doriclea is a major achievement for The Stradella Project, which here reaches its fifth volume.

Emőke Baráth is a feisty Doriclea and nowhere more so than in her encounter with Xavier Sabata’s Fidalbo in Act II. But it’s Gabriella Martellaci’s rich contralto as the worldly-wise Delfina that lingers on the ear, and the magnificent music-making from Il Pomo d’Oro.

A multitude of little short arias and duets are performed with zesty vibrancy by Il Pomo d’Oro…Emke Baráth’s Doriclea and Giuseppina Bridelli’s Lucinda are both crystalline and sensual. The steadfast Celindo’s laments in response to Lucinda’s unwarranted scorn are sung dulcetly by Luca Cervoni.

The standouts are unquestionably Emőke Barath’s beautifully sung and articulated Doriclea, a superbly rounded assumption of the part, and the bass Riccardo Novaro’s magnificent and richly comic portrayal of the servant Giraldo…Andre De Carlo’s direction of the small ensemble drawn from Il Pomo d’Oro is exemplary.