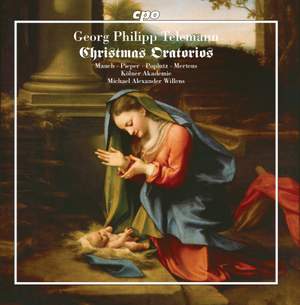 V. Setzt an, setzt an

Our most recent Telemann album is a special highlight for the Christmas season! It brings together three Christmas oratorios from Telemann’s Oratorischer Jahrgang for the church year 1730/31 and a cantata from the annual cycle Musicalisches Lob Gottes printed in score form in Nuremberg in 1744. The oratorios are new discoveries and premiere recordings. Even if the works concerned are of cantata length, the term “Oratorio” is in this case perfectly justified. Not only the soprano, alto, and other vocal parts sing but also personified allegories such as Faith, Hope, and Love. Telemann’s musical realization of the poetic sources of the writer and musician Albrecht Jacob Zell is distinguished by great imagination and subtle artistry. The affections and emotions contained in the texts penned by Zell and the Biblical texts inserted by him in the arias and choruses are developed logically and with great feeling: here Telemann employs and combines the whole spectrum of compositional techniques at his command. Telemann’s opulent settings were made to order for the rich resources of Hamburg’s church music, for which he had available eight vocalists as well as some twenty instrumentalists.

Willens and the Kölner Akademie premiere three rediscovered short oratorios from Telemann’s 1730-31 cycle for the liturgical year, performed superbly by eight singers and just over 20 instrumentalists (the same resources Telemann had at his disposal).