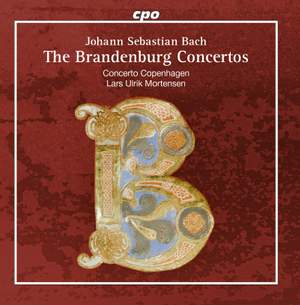 Not a Brandenburg set of the hard-hitting, exuberant kind, but one which just holds things back enough to reveal the music’s wealth of musical detail, as well as the refined musicality of its... — Gramophone Magazine, January 2019 More…

CPO’s highly acclaimed Bach series featuring the Concerto Copenhagen and Lars Ulrik Mortensen continues with a release presented in surround sound. The Brandenburg Concertos are practically synonymous with Baroque music. Bach himself presumably would have been surprised to learn of their symbolic status. After all, he happened to compose them by pure chance and over a longer period of time. After the Brandenburg Concertos had slumbered for a century, they were delivered from archival obscurity in 1850 – when the Bach Society of Leipzig was established and undertook the publication of a complete edition of the works of its composer on the occasion of the hundredth anniversary of his death. However, another century passed before the concertos came to enjoy the great popularity they have today. Concerto Copenhagen conveys the unique experience of an artistic depth connected and united with the celebration of life, erudition, and spontaneity representing the true hallmarks of Bach’s music.

Not a Brandenburg set of the hard-hitting, exuberant kind, but one which just holds things back enough to reveal the music’s wealth of musical detail, as well as the refined musicality of its players.

If you are a fan of Concerto Copenhagen and are collecting Lars Ulrik Mortensen’s output then you will in no way be disappointed by this recording.

Excellent, well-balanced multi-channel sound placing the small ensemble right in the room with the listener.