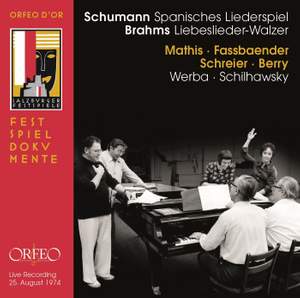 The historical value is undeniable and of considerable musical value as well. — MusicWeb International, February 2019

The Salzburg Festival was founded in 1920. Ever since then artists and music lovers from around the world have been meeting annually at this crossroads of European culture. Much loved and often chided, the Salzburg Festival was exposed to many varied changes during the last 100 years. Yet the original idea as envisioned by its founders- a place where art could flourish under extraordinarily favorable conditions, where it could become a truly great event- has been confirmed time and again in wonderful ways. The present release documents part of the 1974 festival as four great soloist performing at the top of their craft present rarely performed vocal chamber music by Robert Schumann and Johannes Brahms. This performance was the eighth and final Lieder recital of the 1974 Salzburg Festival, and unfortunately much of the press had already left, so reviews are scarce. The Austrian paper The Wiener Zeitung, however, rated it highly: “…The singers here attained an even closer unity, harmonizing their voices in sparkling purity. One sensed the love of musicmaking, a musicianship in which everything is right…”

The historical value is undeniable and of considerable musical value as well.