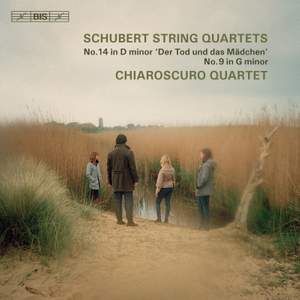 The Chiaroscuro Quartet are particularly good at capturing the more forward-looking moments…Their use of gut strings and a historically-informed approach produces focused tone throughout; the... — BBC Music Magazine, Christmas Issue 2018, 4 out of 5 stars (Performance)/3 out of 5 stars (Sound) More…

One of the truly iconic works in the repertoire for string quartet, Franz Schubert’s Death and the Maiden is named after the song which has lent its theme to the second movement. At the end of Matthias Claudius’s poem, which Schubert had set as a 20-year-old in 1817, Death cradles the Maiden in his bony embrace. And her fear, in the first verse, of encountering his tomb-cold touch is mirrored by his desire for her in the second. In Schubert’s lifetime, death was a constant presence in everyday life and even a young person like himself would have encountered it at close quarters – in fact, his own mother had passed away when he was only 15. When Schubert returns to the song in 1824 and starts work on the string quartet, death has nevertheless grown even more real: in the meantime he has become acquainted with pain and disease during the bouts of the syphilis that he knows will kill him. He turns the song into a set of variations, preceding it with a ferocious Allegro, and following it with a Scherzo and a Finale that have been described as ‘the dance of the demon fiddler’ and ‘a dance with death’. The acclaimed Chiaroscuro Quartet performs the work on gut strings, which brings out the vulnerability and desperation even further. The players then let us down gently with the youthful String Quartet No. 9 in G minor, a work in which the minor key offers Schubert the opportunity to play with light and shadows, rather than full-scale drama.

The Chiaroscuro Quartet are particularly good at capturing the more forward-looking moments…Their use of gut strings and a historically-informed approach produces focused tone throughout; the playing might seem hard-edged at times, but their rhythmic poise is a constant delight and they are always responsive to the interplay between individual lines.

With their ‘period’ sound world (gut strings, Classical bows, sharp articulation) allied to hungry tempos and phrasing that vaults across the bar line, Schubert’s darkest quartet seems more than ever a study in the inexorable power of rhythm…Their unvarnished sonorities (vibrato minimal or non-existent) make Schubert’s harmonic clashes all the more excruciating...It is also, properly, a drama of uncomfortable extremes.

Light and shade abound in performances of brisk, fierce beauty.