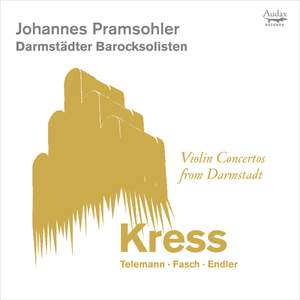 Following on from the unprecedented critical success of the Montanari and Meister: Il giardino del piacere recordingss, this exciting new release features four World Premiere Recordings. After Pisendel and Montanari, Johannes Pramsohler has rediscovered yet another forgotten violinist and presents virtuoso concertos written for and by the Darmstadt court concertmaster Johann Jakob Kress.

Johannes challenges the idea that Baroque music should be the sole territory of period-instrument groups and has teamed up with the Darmstadt Baroque Soloists, an orchestra specialised in historically informed performance on modern instruments. Together they present a lavishly produced album packed with world premiere recordings. Violinist Johannes Pramsohler says of this recording: “With this CD I want to show my discovery of Johann Jakob Kress, a completely forgotten violinist who was the concertmaster in Darmstadt. I even also found a link with him and J.S.Bach and it might even be possible that Bach “copied” from him for his Brandenburg Concertos......Listen to the repertoire and see what you think! The other pieces on the disc are all virtuoso concertos for solo violin and big orchestra with oboes, bassoon, trumpets, timpani and a full sound, offering a wonderful snapshot to rediscover the virtuosic music from this time.”