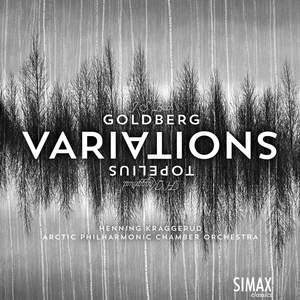 Henning Kraggerud and the Arctic Philharmonic Chamber Orchestra present Bach’s immortal Goldberg Variations in a brand-new version for chamber orchestra coupled with a new set of variations by Kraggerud: Topelius. Zachris Topelius (1818-1898) wrote essays, poems, fairytales and children’s stories but also helped forge a pictorial idea of his native Finland in the eyes of his countrymen. Kraggerud wrote his Topelius Variations in 2017 following a commission from the Ostrobothnian Chamber Orchestra in Finland. He describes his 15-minute score as inspired by Topelius’s life and works; like Edvard Grieg in his own famous musical commemoration of the writer Ludvig Holberg, Kraggerud sought to capture Topelius’s time by recalling the sort of musical language that proliferated during it, seen through the filter of the intervening years.

’All the notes and pitches are Bach’s’, Kraggerud says. Together with Bernt Simen Lund in the Arctic Philharmonic Chamber Orchestra he has arranged Bach’s Goldberg Variations for chamber orchestra. In their work they’ve used Bach’s own corrections and additions from his first edition, ignoring additions of supplementary notes and the simplification of certain passages found in other arrangements. Kraggerud describes his decision to juxtapose Bach’s Goldberg Variations with his own Topelius Variations on this recording as ‘a little...cheeky’ but reflects on how one listens to Goldberg when juxtaposed with another set of variations. The variations in Topelius derives from two themes and it is the tension between these moods that drives Kraggerud’s work forward. Like Bach’s Goldberg Variations - albeit not occupying the same clear, classical structure - the piece is propelled by contrast, opposition and dancing energy following a slow preamble in the form of a musical ‘Once Upon a Time’. Henning Kraggerud is a leading solo violinist who is becoming more and more relevant as a composer. This is the third release on Simax Classics where he is working with the Arctic Philharmonic Chamber Orchestra. The release of Between The Seasons (2017) with Vivaldi’s four seasons interspersed with Kraggerud’s own compositions received excellent acclaims. Henning is Artistic Director of the Arctic Philharmonic Chamber Orchestra, who under his leadership has made themselves noted as an energetic orchestra - more than happy to challenge tradition, to national and international acclaim.