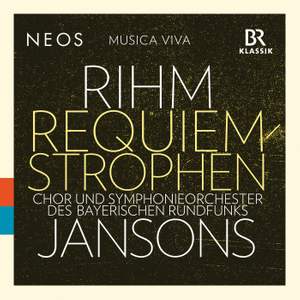 Anyone who considers Wolfgang Rihm to be the 10-minute egg of hard-boiled modernism, or post-modernism, should hear this. The delicate prefiguring (on oboe) of ‘All flesh is grass’, and by extension... — Choir & Organ, March 2019, 5 out of 5 stars More…

The long-anticipated premiere of Wolfgang Rihm's Requiem-Strophen (Requiem Verses) in March of 2017 was also a special debut: Mariss Jansons, principal conductor of the Bavarian Radio Symphony Orchestra, conducted his orchestra for the first time at the musica viva concert series. The live recording of this concert is being released as a co-production with BR Klassik, musica viva and NEOS.

Rihm extends the liturgical Requiem text with, among others, three sonnets by Michelangelo and "verses" by Hans Sahl. Tradition is of considerable significance to Rihm, but in the sense of "assimilating it," "advancing it," and "developing it." In this sense, Rihm's Requiem-Strophen are a highly personal approach to the Requiem genre by one of the most influential composers of our times.

Anyone who considers Wolfgang Rihm to be the 10-minute egg of hard-boiled modernism, or post-modernism, should hear this. The delicate prefiguring (on oboe) of ‘All flesh is grass’, and by extension Pascal’s defiant declaration of mankind as the thinking reed in nature, is evidence of a deep and thoroughgoing humanism in this extraordinary work. The Bavarian singers deliver the texts with a kind of numinous literalism, seeming to muse on every word, giving the whole an air that is part-ritual and part-symposium. A modern masterpiece, and (surely?) a definitive performance.

Its consistently inward mood is leavened by the burnished instrumentation (with lower woodwind and brass to the fore) and the restrained fervency of its vocal writing…The premiere is directed by Mariss Jansons with a keen sense of expressive continuity across the whole…A work which should amply repay repeated listening.