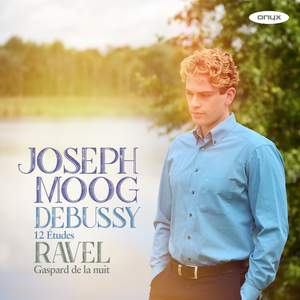 Moog decides to pair Debussy’s tricky Études with that other keyboard Everest, Ravel’s Gaspard de la nuit. He meets all the technical challenges, and it’s an interesting listen. — BBC Music Magazine, March 2019, 3 out of 5 stars More…

Joseph Moog has established an enviable reputation as one of the most exciting virtuosos of our time with wide ranging repertoire that often takes him far off the beaten track. His ONYX recordings include concertos by Rubinstein, Moszkowski, piano sonatas by Tchaikovsky and Scharwenka, and arrangements of Scarlatti sonatas by, Friedman, Tausig, Gieseking and others. Recipient of Gramophone magazine’s ‘Young artist of the Year’ award in 2015 the magazine wrote of him ‘Clearly he is already among the most brilliant of pianists’ In 2012 he was awarded the ICMA Young Artist of the Year award, and in 2014 collected the ICMA best solo instrument award for his album ‘Scarlatti Illuminated’

For his new album Joseph has chosen an all French programme featuring Debussy’s 12 Etudes, and Ravel’s ‘Gaspard de la nuit’ one of the most challenging works in the solo piano repertoire.

Moog decides to pair Debussy’s tricky Études with that other keyboard Everest, Ravel’s Gaspard de la nuit. He meets all the technical challenges, and it’s an interesting listen.

Moog’s remarkable keyboard prowess and great gift for colouristic refinement certainly lend themselves to this repertoire, notwithstanding strong catalogue competition…He imbues Ravel’s ‘Ondine’ with marvellous textural control throughout, even when playing full-out at the climax…’Scarbo’ is the prize here. Moog’s effortless mastery may not tap into the dark or demonic currents served up by Ivo Pogorelich or Benjamin Grosvenor, yet his nimble, playful and scintillating reading is on the highest level.