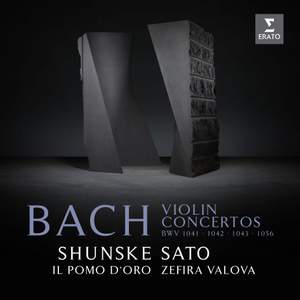 All the speeds here just feel right: unhurried, but equally brimming with energy and flow. What really makes this recording one to treasure, though, is the degree of uncontrived personality and... — Gramophone Magazine, January 2019 More…

Shunske Sato, one of the world’s most distinctive Baroque violinists, joins Il Pomo d’Oro – an ensemble as imaginative as he is – for Bach

’Moments of pure joy‘ were what Bachtrack experienced on one of Shunske Sato’s visits to London, and this Japanese-American violinist’s virtuosity and sheer joie de vivre make him an ideal partner for Il Pomo d’Oro in both of Bach’s solo violin concertos.

Sato is positively immersed in Bach: he’s the concertmaster of the Netherlands Bach Society, which is currently engaged in performing Bach’s complete works. But he’s all about reinvention as well as reverence, and Zefira Valova and the livewire period instrument ensemble ll Pomo d’Oro never stint on theatre either.

Shunske Sato was born in Tokyo, Shunske immigrated to the US at the age of four. Resident in The Netherlands, Shunske serves as concertmaster of Concerto Köln and the Netherlands Bach Society, and is often invited as a guest concertmaster for ensembles such as the Freiburger Barockorchester and the Scottish Chamber Orchestra. In 2013 he was invited to join the faculty of the Amsterdam Conservatory.

Zefira Valova is currently living in Sofia, Bulgaria. She has been awarded at many national (Bulgarian) and international competitions, such as the Baroque Musik Academy – Blankenburg, Germany.

All the speeds here just feel right: unhurried, but equally brimming with energy and flow. What really makes this recording one to treasure, though, is the degree of uncontrived personality and artistry on display…Another point I can’t shout loudly enough about is the exceptional blending…Have I sold it enough? I hope so. Because really, this is properly heavenly.