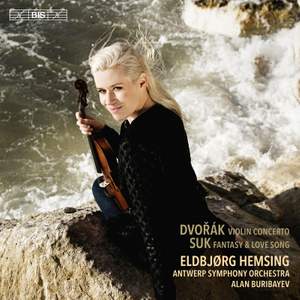 Her reading of the Dvořák is agile and characterful, although perhaps lacks the soaring sweetness that the Concertos’ central movement calls for…both Hemsing and ensemble shine much more convincingly... — BBC Music Magazine, January 2019, 3 out of 5 stars (Performance) / 4 out of 5 stars (Recording) More…

Originally, this album was intended to be Eldbjorg Hemsing’s recording debut, but the repertoire interest in what became her debut (Borgstrom and Shostakovich) swayed the label and they changed the plan accordingly. Rarely has a recording debut had the impact of Eldbjorg’s debut album, and she has since been catapulted into international awareness in a very short time. On this release, we have more standard repertoire, no less well played and beautifully accompanied by the Antwerp Symphony Orchestra (previously the Royal Flemish Symphony Orchestra) under Alan Buribayev. This is the second record in a projected long series. A champion of Norway’s rich musical tradition, Eldbjorg Hemsing has been performing on some of the world’s most prestigious stages since age 11, when she made her solo debut with the Bergen Philharmonic Orchestra. Her violin playing represents a unique blend of classic Viennese sound, drawn from her lessons with Boris Kuschnier; a contemporary sensibility absorbed through numerous projects with the Oscar-winning composer Tan Dun; and a deep affinity with her Scandinavian heritage that she proudly showcases in every aspect of her active musical life.

Her reading of the Dvořák is agile and characterful, although perhaps lacks the soaring sweetness that the Concertos’ central movement calls for…both Hemsing and ensemble shine much more convincingly in Suk’s Fantasy in G minor…The recording’s real highpoint is, however, the all-too-brief final track of the disc, Suk’s delightful ‘Liebeslied’…Hemsing plays this endlessly tender ‘love song’ with a perfect blend of heart and restraint.

[The Suk is] a seductive introduction to the disc’s strengths: spotlighting the gleaming, high-calorie tone and expressive phrasing of the young Norwegian violin Eldbjørg Hemsing against swathes of deep orchestral velvet…Big, upfront readings with undeniably attractive solo playing supported by extrovert conducting and an orchestra which, while responsive, is very much a secondary part of the sonic picture.

A splendid combination of purity and sweeping, Heifetz-like intensity.