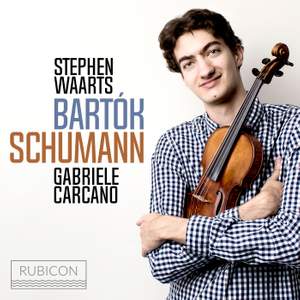 Stephen Waarts and Gabriele Carcano find musical affinities between the composers. Bartók’s style is not just earth and fire, but poise, lyricism and elegance as well. Perhaps his works receive... — BBC Music Magazine, March 2019, 4 out of 5 stars More…

‘From the first note of Stephen Waarts’ Brahms G major sonata I was hooked, and within a few bars I was moved to tears’ The Strad

‘Stephen Waarts gave an outstanding debut at the Kennedy Centers’s Terrace Theater...Waarts showed an uncommon, preternatural sense of tonal color and lyrical beauty on the instrument’ The Washington Post

Stephen Waarts’ innate and individual musical voice is establishing him as a firm favourite with audiences. With a voracious appetite for repertoire, Stephen has already performed over thirty standard, as well as rarely performed violin concertos, and is a passionate chamber musician.

For his debut recording Stephen has chosen the rarely played Schumann 1st violin sonata and the Three Romances, and the demanding 1st sonata by Bartok, and his Hungarian Folktunes. He is accompanied by fellow Rubicon artist Gabriele Carcano.

Stephen Waarts and Gabriele Carcano find musical affinities between the composers. Bartók’s style is not just earth and fire, but poise, lyricism and elegance as well. Perhaps his works receive the more successful performances here: the folksong arrangement are full of atmosphere, freshness and verve.

Waarts’s tone is just gorgeous – rich and singing, its sweetness balanced by a dark lustre. In the first movement, he and pianist Gabriele Carcano put lyricism at the forefront…But it’s Bartók’s First Sonata that’s the prize here. Waarts and Carcano navigate the work’s varied, often thorny terrain without a misstep, and reveal so much in the score that’s wondrous and beautiful…Waarts digs in fiercely when called for, yet his control is never in doubt…I’m convinced he’s the real deal.

If it’s startling to read in Waarts’s note that “the composers on this album both need advocates”, his stylish and searching playing, with Carcano’s brilliant pianism, makes a persuasive case for their respective first sonatas.

An average performer would play up the contrasts…Waarts, being far from average, reveals the affinities between them…Carcano is fully Waarts’s equal, tackling the fearsomely difficult piano part of Bartók’s piece with unflappable aplomb. Neither work may be quite a masterpiece, but these tremendous performances make it seem as if they are.