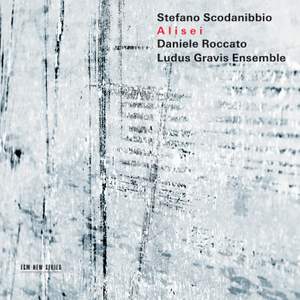 The Italian double bassist and composer Stefano Scodanibbio (1956-2012) created extraordinary music for his instrument. Alisei (Trade Winds) features his compositions for solo bass, for two basses, and for bass ensemble.

Among them is a world premiere recording of Otetto, an often breath-taking thirty-minute compendium of all the extended techniques he invented or developed throughout his life. "It is his great spiritual legacy", says Danielle Roccato, who co-founded the Ludus Gravis bass ensemble with Scodanibbio.

As solo performer, Roccato rises to the challenges of Due Pezzi Brilanti, a piece which pushes virtuosity to its limits, and "makes the bass sing in its on true voice" on the title composition. Da Una Certa Nebbia, for two basses, also a premiere recording, pays implicit tribute to the work of Morton Feldman.

Alisei is the second ECM New Series recording to address the music of Stefano Scodanabbio. The album Reinventions, issued in 2013, featured his highly imaginative recasting for string quartet of three Contrapunctus from Bach's Art of the Fugue, together with Mexican songs and Spanish guitar music, all brought into a compelling unity.