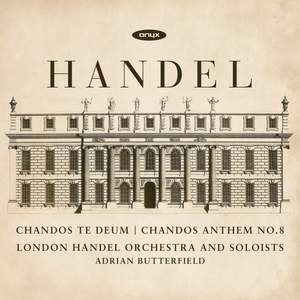 The London Handel Orchestra and Soloists, under the assured direction of Adrian Butterfield, offer lightly-articulated and texturally lucid performances, where Grace Davidson’s limpid A major... — BBC Music Magazine, March 2019, 4 out of 5 stars More…

I. We praise thee, O God

III. The glorious company of the Apostles

IV. Thou art the King of Glory, O Christ

V. When thou tookest upon thee to deliver man

VI. When thou hadst overcome the sharpness of death

VII. Thou sittest at the right hand of God

VIII. We believe that thou shalt come to be our Judge

X. And we worship thy Name, ever world without end

XI. Vouch-safe, O lord, to keep us this day without sin

XII. O Lord in thee have I trusted

II. O come let us sing unto the Lord

IV. Glory and worship are before Him

V. Tell it, tell it out among the heathen

VII. The Lord preserveth the souls

VIII. For look as high as the heaven is

IX. There is sprung up a light for the righteous

Before coming into contact with James Brydges, Earl of Carnarvon, Handel was is dire straits in London. His pension of £200 a year for teaching the Royal princesses had stopped, as had the public taste for opera. London had plunged into a hedonistic, alcohol- and gambling-driven lifestyle, where the bawdier things were the better. Brydges, one of the most colourful and roguish figures of the day, had built himself a vast palace (from wealth plundered whilst he was Paymaster General during the Spanish Wars of Succession) to rival anything the King could boast of – Cannons House in north London, set up as a rival court to King George I, where he employed Handel to replace Johann Pepusch as Kapellmeister. No surprise that the Earl has been described as ‘having no enmity with his conscience:’ The ‘King of Bling’ would have 13 Chandos Anthems and the Te Deum on this recording composed by a grateful Handel. It couldn’t last, though, and Handel was eventually lured back to the embrace of the Royal Court and London’s rediscovered love of opera. Now the 1st Duke of Chandos, Brydges had lost his vast fortune and his home in the South Sea Bubble financial crisis of 1720, and Cannons House was demolished, its treasures and features sold off. It was as if it had never been – except for Handel’s glorious music composed at Cannons House.

Butterfield’s slimline performing forces with the music like a glove. The single voices combine harmoniously in contrapuntal choruses, and unaccompanied passages are shaded poignantly…The relaxed sincerity of his musicians yields revelatory new insights.