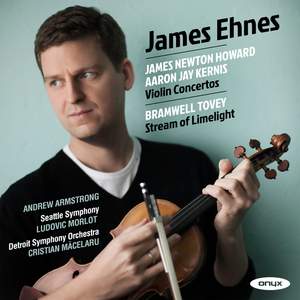 This disc showcases three commissions aimed squarely at the Canadian virtuoso’s dazzling skillset. At the centre is a concerto by James Newton Howard…The work is lyrical, wildly cavorting and... — BBC Music Magazine, Christmas 2018, 5 out of 5 stars More…

Tovey, B: Stream of Limelight

Three works written for James Ehnes, and receiving their premiere recordings. James Newton Howard’s music will be familiar to movie fans the world over. His 120 film scores include ‘The Prince of Tides’, ‘Michael Clayton’, ‘My Best Friend’s Wedding’, ‘The Village’, ‘Defiance’ and ‘The Hunger Games’ (the recording was produced by the legendary T Bone Burnett) and he is one of the most respected composers currently working in film. Commissioned to write a concerto for James Ehnes and the Pacific Symphony, Howard admitted to feeling ‘thrilled, excited, expectant and ultimately terrified’.

Bramwell Tovey and James Ehnes musical relationship goes back to 1990, and they have performed together countless times. Stream of Limelight gives James’s incredible technique ample opportunity to dazzle, and is a superb finale to this fascinating album of new compositions.

This disc showcases three commissions aimed squarely at the Canadian virtuoso’s dazzling skillset. At the centre is a concerto by James Newton Howard…The work is lyrical, wildly cavorting and – in the Andante semplice second movement – sweetly poignant. Aaron Jay Kernis’s preceding concerto requires Ehnes to delve even deeper into his virtuoso’s tool kit. With a highly charged first movement, Kernis sets out his stall with intense drama, before a fabulous film noir-ish second movement

There’s some entertaining, dazzling, smile-inducing, toe-tapping music here but I can’t give you a cast-iron promise that there’s much more…Ehnes’s characteristic sweetness and tenderness married to unerring strength and direct musicianship are on display in all three pieces.

The concerto by Aaron Jay Kernis is heard in an incredibly powerful live performance, the taxing violin part superbly executed. The Chaconne begins with an unashamedly romantic gesture, going on to embrace a wide range of emotions including some real Innigkeit. Both performance and recording are beyond criticism. [Newton Howard] His concerto is lyrical; there is almost an English twinge to the first movement. The Andante semplice is the work’s emotional heart (the film origins clear) while the finale confirms Ehnes’ virtuosity. Finally, Bramwell Tovey’s brief Stream of Limelight, the only non-orchestral piece, an engaging soliloquy in the spotlight. Top-rank recording throughout.