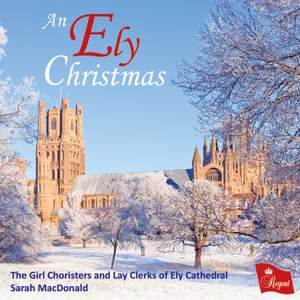 Bright, firm, well-supported but honest singing that is frequently joyous and only occasionally a little strained. — Gramophone Magazine, December 2018

Lole: Love came down at Christmas

Todd: My Lord has come

New carols, new arrangements, and a selection of beautiful and exhilarating Christmas favourites sung by the remarkable Ely Cathedral Girl Choristers, who are joined in a number of tracks by the Ely Cathedral Lay Clerks. Recorded in the glorious acoustic of Ely Cathedral this disc offers twenty-three immediately attractive and captivating carols for Christmas.

Ely Cathedral Girls’ Choir was founded in 2006. The 16 choristers are all boarders at King’s Ely, and are currently in the Senior School, in Years 9 to 13. The girls rehearse four mornings a week before school, and sing Evensong twice per week during school term. Weekend duties and other cathedral commitments occur once or twice a month, and they are regularly involved in the major liturgical feasts, often singing with the boys and men.

Since their foundation the Girls have made several critically acclaimed commercial CDs on the Regent label (both on their own, and jointly with the Choir of Selwyn College, Cambridge).

The girls have sung recently with Lesley Garrett and John Rutter, and were featured on BBC television in Gareth Malone’s ‘The Choir: Sing while you work’. The girls have broadcast Choral Evensong on Radio 3 on a number of occasions.

Bright, firm, well-supported but honest singing that is frequently joyous and only occasionally a little strained.