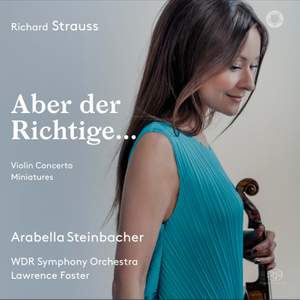 Steinbacher is predictably eloquent [in the song arrangements], the playing classy. But the violin itself struggles to project in what are already string-heavy orchestrations, at a tessitura... — Gramophone Magazine, January 2019 More…

No. 1, Wiegenlied (Arr. for Violin & Orchestra)

This album is violinist Arabella Steinbacher’s tribute to the favourite composer of her family household. The music of Richard Strauss has played a crucial role throughout her life. As great Strauss lovers, her parents named her after the main character of Strauss’ opera Arabella, and the family house was filled with Strauss melodies, often sung live by famous singers accompanied by Steinbacher’s father, who was a solo-répétiteur at the Bavarian State Opera in Munich.

The album starts with a piece that Strauss originally conceived for violin and orchestra, the rarely-performed Violin Concerto in D minor, composed when he was still a teenager. Two other early instrumental works – the Romanze (usually performed by cello and orchestra) and Scherzino (an arrangement of an early piano piece) – are also featured on this album. The rest of the repertoire consists of famous Strauss songs (Zueignung, Wiegenlied, Traum durch die Dämmerung, Cäcilie), “sung” on Steinbacher’s violin. The apotheosis of this highly personal programme is Steinbacher’s rendition of “Aber der Richtige…”, the celestial duet from Arabella. Arabella Steinbacher, a multiple award-winner with an extensive PENTATONE discography, is accompanied by the WDR Symphony Orchestra, conducted by Lawrence Foster.

Steinbacher is predictably eloquent [in the song arrangements], the playing classy. But the violin itself struggles to project in what are already string-heavy orchestrations, at a tessitura that sounds exciting when sung but sits far too comfortably in the instrument’s middle range.

The daughter of a repetiteur at the Bavarian State Opera, Steinbacher was exposed to Strauss’s vocal music at a young age, and she colours the soaring lines of four song-transcriptions and her namesake’s ‘Aber der Richtige’ with a palpable awareness of the words behind the music. The violin can’t quite cut through the thick orchestral texture at the climax of Cäcilie as a dramatic voice would, true, but that’s a small price to pay for such elegant and idiomatic performances.

Arabella Stenbacher is a stunning violinist and carves her own furrow, her 1716 ‘Booth’ Strad singing beautifully under her stewardship. The Concerto is overtly Romantic; Steinbacher finds a depth of interpretation, the WDR orchestra a fine partner.