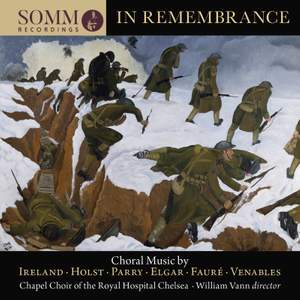 Guest, D: For the fallen

In the centenary anniversary year of the end of the First World War and on the eve of the 80th anniversary of the beginning of the Second World War, SOMM Recordings pays tribute to those who fought and fell in battle with In Remembrance. A moving compendium of music spanning 130 years, it features the Chapel Choir of the Royal Hospital Chelsea, the Choir of Chelsea Pensioners, Staff and Volunteers, sopranos Katy Hill and Leah Jackson, baritone Gareth John and organists James Orford and Hugh Rowlands under the direction of William Vann. Founded in 1682 by King Charles II, the Royal Hospital is home to the world-famous Chelsea Pensioners – retired veterans of the British army – whose contributions on three tracks adds its own special poignancy to In Remembrance. Moving choral works commemorating courage and offering comfort by Hubert Parry (his anthemic Jerusalem), Gustav Holst (the stirring I Vow to Thee, My Country) and Edward Elgar (his serene partsong They are at rest) are heard alongside equally affecting pieces by their contemporaries and successors, Charles Villiers Stanford, John Ireland, Douglas Guest and Charles Harris.

Directed by William Vann, the Choir of the Royal Hospital Chelsea, with its clear, ringing tone, provides beautifully nuanced performances, especially of the a cappella items, Stanford’s numinous introit ‘Justorum animae’, Parry’s six-part ‘There is an old belief’, and Elgar’s elegiac ‘They are at rest’.

The vocal quality is high. For me the pick of the piece is Gustav Holst’s ‘Ode To Death’.