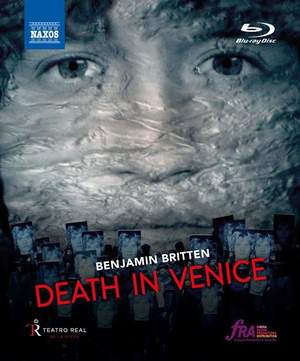 After so many disappointing productions, it’s exciting to watch one which casts a lurid new light on this disturbing opera and, more importantly, gives scope for two very fine singing actors…Daszak,... — BBC Music Magazine, February 2019, 5 out of 5 stars (Performance) /4 out of 5 stars (Picture & Sound) More…

Benjamin Britten’s desire to create a substantial leading role for his long-term professional and personal partner, Peter Pears, was the impetus for writing his final opera, Death in Venice. Britten’s intricate and chamber-like score features prominent roles for percussion, which enhances the growing sense of unease and obsession so prevalent in the opera. The stylised staging by director Willy Decker and set designer Wolfgang Gussmann is full of erotic tension and seductive elegance, resulting in a visually enticing show, full of powerful images and symbols that evolve organically as the drama unfolds. Admired for his versatility, range and dramatic power, the British tenor John Daszak dominates in the main role of Gustav von Aschenbach for which he received critical acclaim. The cast also includes the baritones Duncan Rock and Leigh Melrose, and the Polish actor Tomasz Borczyk in the role of Tadzio.

After so many disappointing productions, it’s exciting to watch one which casts a lurid new light on this disturbing opera and, more importantly, gives scope for two very fine singing actors…Daszak, exuding well-meaning civilised weariness as Aschenbach, and the glinty-eyed, sinuous Leigh Melrose who plays and sings the various sinister characters who by turns torment and seduce Aschenbach.

The staging is intelligent, spare, rather dark…for the most part Decker’s imagery is focused on probing symbolic figures of death and sexuality…[he] does break new ground in how far he is ready to bring the story’s sexual undercurrent to the surface…Daszak comes to the role of Aschenbach with more voice than most of his predecessors…Melrose offers vivid characterisations in the nemesis roles…Costanzo sings a suitably ethereal Apollo.

Daszak proves well suited to the role of Aschenbach, his interpretation founded on musical command, excellent diction and wide-ranging talon colouring…The problem for many admirers of the opera will be that Decker is determined to make explicit things that are deliberately left ambiguous in Britten’s original…There are conductors who have given the score more impetus than does Alejo Pérez, but the orchestral playing is notable for its skill and refinement.