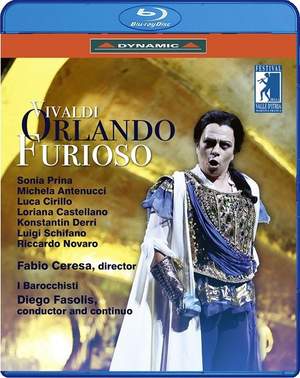 If you like your Baroque opera understated or postmodern (or uncut) then Fabio Ceresa’s Orlando furioso is not for you. Taking Vivaldi’s opera absolutely at face value, the director delivers... — Gramophone Magazine, December 2018 More…

Vivaldi’s Orlando Furioso was chosen to open the 43rd Festival della Valle d’Itria. This baroque opera is a true feast for the senses, with peaks of sheer poetry and a sense of wonder. Director Fabio Ceresa was clearly inspired by the works of Gustav Klimt, both for the setting and the costumes. Conductor and Continuo Diego Fasolis leads the excellent Barocchisti ensemble with an elegant touch, and an unfailing ability to fully convey the music’s nuanced coloratura. The production was very well received, with the cast highly praised by audience and critics alike. Sonia Prina proved highly convincing in the title role, both for the quality of her voice and for her outstanding acting skills - a true 'ba-rock star'. Lucia Cirillo (Alcina) was complimented by Bachtrack for her 'flawless coloratura and virtuosity in ornamentation', while Riccardo Novaro (Astolfo) displays a stylish poise and vocal warmth. The younger singers also contributed notable performances: Loriana Castellano, Konstantin Derri and Luigi Schifano (Bradamante, Medoro and Ruggiero respectively).

If you like your Baroque opera understated or postmodern (or uncut) then Fabio Ceresa’s Orlando furioso is not for you. Taking Vivaldi’s opera absolutely at face value, the director delivers a production that’s a gorgeous sprawl of period sensation and spectacle, high on camp and low on concept…Fasolis and I Barocchisti provide efficient accompaniment, greatly enhanced by the rhetorical flair and wit of Fasoli’s own continuo-playing

The title role is commandingly taken by Sonia Prina, dramatically excellent in Orlando’s madness and still capable of precise articulation in extended passaggi. But excessive vibrato has now become a problem and the voice is less secure than it once was….I Barocchisti play well under the characteristically idiosyncratic direction of Diego Fasolis.