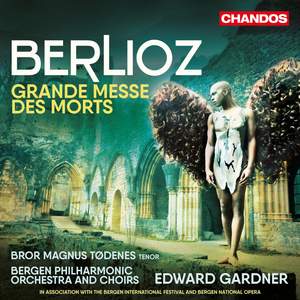 [Gardner] has the measure of this work – of its pacing, its contrasts and, not least, of its idiosyncrasies. Among my favourite moments here is the momentous hush before the final ‘mors stupebit’…Achieving... — BBC Music Magazine, January 2019, 4 out of 5 stars More…

With this surround-sound recording of Berlioz’s Requiem, Edward Gardner and the Bergen Philharmonic Orchestra tackle the infinite and the immeasurable.All the grandiose, striking beauty of the Requiem’s large-scale ceremonial is encapsulated by first-class vocal and orchestral forces, fully utilising the spatial possibilities of Grieghallen in Bergen. The matching of space and sonority was one of Berlioz’s lasting obsessions, one experience in St Paul’s Cathedral in London throwing Berlioz into a delirium of emotion from which he took days to recover. His Grande Messe des morts, notorious for its requirement of four brass bands in addition to a large orchestra and chorus, taken here from live concerts, has often been seen as one of the most emotionally powerful works of its kind. Setting a solemn and austere, even ascetic text, the music is not that of an orthodox believer but of a visionary, inspired by the dramatic implications of death and judgement.

[Gardner] has the measure of this work – of its pacing, its contrasts and, not least, of its idiosyncrasies. Among my favourite moments here is the momentous hush before the final ‘mors stupebit’…Achieving homogeneity from four separate choirs for any performance can be a problem, but here they blend perfectly and not only does their massed sound balance well with the orchestra but, for the most part anyway, words are audible.

It is very much on the devotional side, and event contemplated and observed rather than experienced.

The Bergen Philharmonic plays Berlioz’s wonderfully imaginative orchestral score quite marvellously and at the very end, where the subdued choral writing flowers into radiance the Bergen choirs produce a lovely sound.

This vivid live Requiem is one of the quickest on disc, but rarely seems lacking in spaciousness, for the good reason that it was recorded in a concert hall — the Grieghalle, in Bergen — not in a resonant cathedral. Gardner’s well-drilled, expressive forces have the ever-imposing music’s measure.