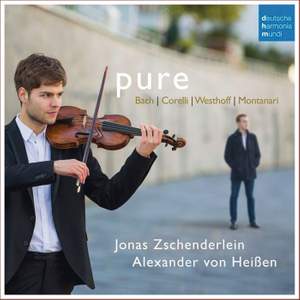 Pure - Works For Violin and Harpsichord

Westhoff: Violin Sonata No. 2 in A minor

Westhoff: Violin Sonata No. 2 in A Minor: III. Imitazione del liuto (Arr. for Violin and Guitar)

Brillant mixture of well known and rather unknown highly virtuosic violin music from the 18th Century. Inspired by Johann Sebastian Bach and the importance of this works for various Italian composers of the time.

Incl. a violin sonata by Johann Paul von Westhoff (1656-1705), a German Baroque composer and violinist. One of the most important exponents of the Dresden violin school, he was among the highest ranked violinists of his day, and composed some of the earliest known music for solo violin. There are actually no other recordings of this second violin sonata available.

Jonas Zschenderlein and Alexander von Heissen are both members of the baroque boy group “4 Times Baroque” whose trademarks are fresh, energetic and thrilling performances. Their debut album on DHM, called “Caught in Italian Virtuosity” (19075818232), was a big success and has been highly praised by the critics.

According to contemporary sources, Antonio Maria Montanari (1676-1713) experimented with enharmonic micro-intervals. His high standing as a violinist suggests that he would have had a teacher-pupil relationship with many talented players in Rome, especially after the death of Arcangelo Corelli, including, perhaps, Pietro Antonio Locatelli. Montanari's works have yet to be studied in depth. Actually there are only two other recordings of his violin sonata in d minor available on the market.