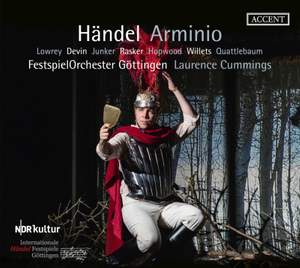 Lowrey is as expressive as he is athletic, and his characterisation carries the action…Sometimes Devin steals the show with her sincerity, vocal lustre, wistful pathos and knock-out extemporising.... — BBC Music Magazine, Christmas Issue 2018, 4 out of 5 stars More…

‘Hermann of the Cherusci’ and the Varus Battle found their way into the German founding myth a long time ago. Arminius, whose Teutons roundly defeated three of Varus’ legions, was already described as the ‘Liberator of Germania’ by Tacitus. In Handel’s Arminio, the liberation battle is only the background against which the characters come to terms with themes like honour, duty, obedience, love and freedom. Arminio premiered in the Covent Garden Theatre on January 12, 1737 but disappeared from the London stage after only six performances.

Almost 200 years later, it was revived in Leipzig as Hermann und Thusnelda. After performances in Halle (2014) and Karlsruhe (2015), this late work of Handel has been recorded at the Handel Festival in Göttingen 2018 and is now presented on CD.

Lowrey is as expressive as he is athletic, and his characterisation carries the action…Sometimes Devin steals the show with her sincerity, vocal lustre, wistful pathos and knock-out extemporising. Both principals draw inspiration from conductor Laurence Cummings, whose brilliant manoeuvring through the score shows why he’s a world-renowned Handel interpreter.

Cummings finds a winning gait in the music often missed by Petrou [on his 2016 Decca recording], to which can be added that one of the greatest assets of the new set is the playing of the Gottingen orchestra. Vocally the set is good, if not outstanding. The countertenor Christopher Lowrey’s Arminio is sung with excellent tone and good technique, though his lower register is weak (as was Annibali’s, so we are told).