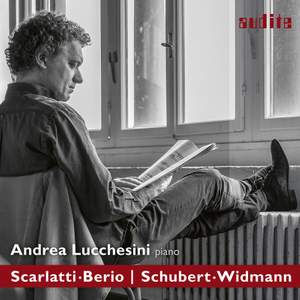 The Berio pieces have been used in this way before, but Lucchesini presents a more ambitious endeavour. His performances are superb — an intensity at one with exquisiteness — and, though the... — Sunday Times, 23rd September 2018 More…

No. 2 in A-Flat Major: Andantino

No. 4 in C-Sharp Minor: Moderato

No. 5 in F Minor: Allegro vivace

Luciano Berio's references to Scarlatti and Jörg Widmann's homage to Schubert are contrasted by Andrea Lucchesini with original works of the two earlier composers, weaving both original and reference into a new whole. Prominent modern-day composers cultivate a relationship with historical compositional styles, bringing to light innovations and divergences as well as a continuation of and indebtedness to the past.

Berio and Widmann are both closely involved with this new recording: Lucchesini and Berio enjoyed a close personal relationship during the composer's lifetime, while Jörg Widmann wrote a text for the new production and is also connected to Andrea Lucchesini.

Andrea Lucchesini is one of the leading Italian pianists of our day. His triumph at the Dino Ciani International Competition at a young age marked the beginning of his international concert career. He has since performed all over the world with leading orchestras under renowned conductors as well as in solo recitals. His primary interest lies in contemporary music. Berio's Echoing Curves was premiered by Lucchesini, and he was also involved in the composition of the Sonata, Berio's last work for solo piano. Since 1990 the pianist has increasingly devoted himself to chamber music as well, performing in many different instrumental combinations and particularly in close collaboration with the cellist Mario Brunello and the Quartetto di Cremona.

The Berio pieces have been used in this way before, but Lucchesini presents a more ambitious endeavour. His performances are superb — an intensity at one with exquisiteness — and, though the juxtapositions come with a shock, they have a rightness.