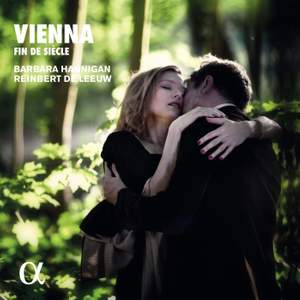 Hannigan’s luminous voice perfectly suits this music. She conveys the uneasy, almost unhinged feel of the fin de siècle not only in her lyric singing, but also in her crooning, swopping, sliding,... — BBC Music Magazine, Christmas Issue 2018, More… 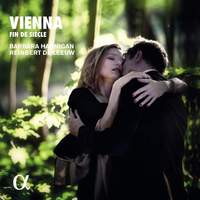 After the huge success of her first album for Alpha, Crazy Girl Crazy (Alpha 293), which received a Grammy Award, a JUNO Classical Award in Canada, the Preis der Deutschen Schallplattenkritik, FFFF in Télérama and DIAMANT in Opéra Magazine and was BBC Music Magazine CD of the Month, Barbara Hannigan is back with her long-time collaborator, the Dutch pianist and great interpreter of twentieth-century music Reinbert de Leeuw, for a recital exploring the roots of modern music, with the composers who left their mark on the turn of the twentieth century: Hugo Wolf (Mignon Lieder), Arnold Schoenberg (Vier Lieder Op.2), Anton Webern (Fünf Lieder nach Gedichten von R. Dehmel), Alexander Zemlinsky (selected lieder), Alma Mahler (Die stille Nacht etc.) and Alban Berg (Sieben frühe Lieder). From what has been called the Second Viennese School, an incredible mix of musicians, painters, writers and other artists frequenting salons and cafés, a completely new musical language was born. Barbara Hannigan is especially fond of this repertory and has long championed it. Of course, we think of Berg and his unforget-table Lulu: ‘The artist who sings’, as journalists often like to describe her, embodies this music with her legendary dramatic sense, making each of these lieder a story in itself, even a mini-opera . .

Hannigan’s luminous voice perfectly suits this music. She conveys the uneasy, almost unhinged feel of the fin de siècle not only in her lyric singing, but also in her crooning, swopping, sliding, whispering and weeping. Reinbert de Leeuw matches her with his delicate touch, and his sense of layering in the carefully terraced accompaniments…’Frühlingstag’ is exquisitely, unforgettably beautiful.

The delivery is intimate, confiding and almost coquettish. De Leeuw offers gentle, patient and discreet accompaniment. Hannigan’s voice is lithe and flexible rather than rich and firm…You might, like me, find yourself thinking more of the cabaret than the concert hall. At times it’s supremely seductive…And her high notes in Berg’s ‘Schilflied’ are difficult to resist.

I’m used to slightly bigger, more substantial voices in the songs of Berg and Schoenberg, but no-one could accuse the magnetic Canadian soprano of lacking in sensuality: her supple, slender soprano has its own unique colour-palette (she specialises in shimmery golds and creams which put me in mind of Gustav Klimt), and she’s supremely alive to the strange beauty of the poetry…Sheer voluptuous delight from start to finish.

Hannigan’s voice wraps itself lovingly around these vocal lines, savouring every chromatic morsel...she conveys the trembling fragility and pastel colours of this music with such perfect tact, and De Leeuw measures the accompaniments so precisely, leaving their unresolved dissonances hanging in space, that a whole expressive world seems perfectly evoked.

A third of the album’s songs draw on poems by Richard Dehmel, who saw love and sex everywhere he looked — something reflected in the sensuous beauty of Hannigan’s voice as she traces the vocal lines’ leaps and bounds, always pure in tone. De Leeuw’s piano playing, gently crisp and penetrating, casts its own spell, enhanced by the sympathetic recording.

Hannigan and her pianist, Reinbert de Leeuw, work seamlessly together to create a magical sound world. Her voice has a surprising richness, almost voluptuous, for the Schoenberg and Berg, but she adopts a far more blanched tone for the Webern. And she certainly isn’t afraid to use portamenti but resists swooping and scooping, always maintaining a sense of line and destination.