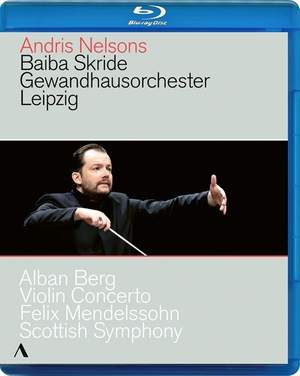 As recorded in Leipzig's handsome new(ish) Gewandhaus Hall, the sound is a feast in its own right - a lovely balance of clarity, spaciousness, and glowing warmth. — BBC Music Magazine, December 2018, 5 out of 5 stars More…

For his inaugural concert as the new Gewandhauskapellmeister, Andris Nelsons chose three pieces, each with symbolic power. At its centre is the 'Scottish' Symphony by Felix Mendelssohn, his most prominent predecessor, which was premiered by the Gewandhausorchester Leipzig under the baton of the composer himself in 1842. The symphony is framed by a commissioned work by the Leipzig composer Steffen Schleiermacher and Alban Berg’s Violin Concerto, a key work of classical modernism. There is no question about it: this programme defines his agenda. It professes Leipzig‘s rich musical tradition, spanning the period from the 19th to the 20th century, and to the music of our time. Recorded at the Gewandhaus zu Leipzig, 22/23 February 2018.

As recorded in Leipzig's handsome new(ish) Gewandhaus Hall, the sound is a feast in its own right - a lovely balance of clarity, spaciousness, and glowing warmth.

Head buried in the score, Nelsons nonetheless holds a firm grip on the relentless motor rhythms powering the event’s premiere, commissioned from Steffen Schleiermacher…Skride gives a requiescal sort of performance of unruffled poise, without an ugly note in it…The Gewandhaus players often cover themselves in glory…and, if nothing else, show themselves adaptable to the changing winds of taste in music that they can doubtless play with their eyes shut.

Baiba Skride is the soloist in Berg’s Violin Concertos and the two Latvian musicians make for fine partners in this work. She plays with almost supernatural clarity and purity, devoid of showy gestures, remaining still and calm in a slightly billowy blue dress.

These are stellar performances from artists who know exactly what they want to say, and in such a way as to fix the attention firmly on the music rather than themselves.