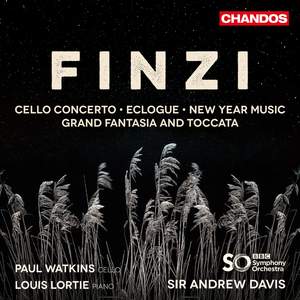 Sir Andrew Davis’s feeling for the composer’s sensitive, harmonically conservative language is abundantly clear in these vivid readings with the BBC Symphony Orchestra. Soloists too are well... — BBC Music Magazine, November 2018, 5 out of 5 stars More…

A broad and meticulous selection of orchestral works and concertos by Gerald Finzi is here matched by a first-class cast of soloists, supported by the BBC Symphony Orchestra under the direction of Sir Andrew Davis, expert in British repertoire and conducting this year’s Last Night of the Proms. Paul Watkins displays exhilarating virtuosity in the Cello Concerto, a central work on this album, composed in the wake of the devastating news that Finzi was terminally ill, but yet filled with ‘vigorous, almost turbulent thematic material’, as he wrote in the programme note for the work’s premiere at the Cheltenham Music Festival in 1955. Louis Lortie, for his part, tackles the high-spirited and majestic Grand Fantasia and Toccata, the Fantasia originally conceived as part of a concerto for piano and strings and first performed on two pianos. This contrasts with the more restrained Eclogue for Piano and Strings, timeless, and blessed with a mood of benediction. This album also features the orchestral Nocturne (subtitled ‘New Year Music’), dark, misty, and at times ironic.

Sir Andrew Davis’s feeling for the composer’s sensitive, harmonically conservative language is abundantly clear in these vivid readings with the BBC Symphony Orchestra. Soloists too are well chosen. Cellist Paul Watkins proves a master of expressing powerful feelings through the prism of British reserve. Admirers of Finzi’s music can buy without hesitation.

Paul Watkins’s heartfelt commitment to the music is matched only by that of Louis Lortie in the exquisite Eclogue and sparkling Grand Fantasia and Toccata, with the less-heard but captivating New Year Music rounding off an album that unquestionably deserves a place in every music-lover's collection.

Watkins’ performance, which manages to be warmly expressive while remaining slightly detached, captures that mood perfectly. Nothing is exaggerated or over-assertive...allowing Finzi’s very individual musical voice to speak for itself, as it does so clearly in all the other performances on this disc too.

Paul Watkins’s captivating performance, supported devotedly by the BBC Symphony Orchestra under an inspired Andrew Davis and captured in opulently detailed sound, radiates insight and conviction in every bar. With first-class couplings, this is a Finzi disc to cherish.