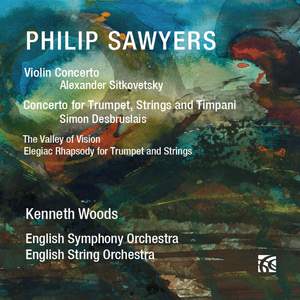 Sawyers: The Valley Of Vision

Philosophers and musicians have argued for centuries about whether music is a universal language or a personal one. It seems tha t it can obviously be either or both, and that there is a huge continuum of language between those musical gestures that are truly universal and those which are almost as personal as a fingerprint. One of the things I find most compelling about Philip’s music is the extent to which it embodies the extremes of both the universal and the personal. As Philip’s output grows and our understanding of his work evolves, we can begin to see that there are musical threads which spill over from one work to the next. In this respect, he is part of a venerable tradition. Sometimes these recurring themes and mo tifs have profound personal significance, sometimes they are simply, as Philip once said to me of a particular rhythmic motif which appears in the vast majority of his pieces at least once, 'very useful'.

The English SO are unfailingly committed in the perceptive hands of Kenneth Woods, who joins the composer in contributing perceptive booklet notes.

An impressive disc of music that is well worth hearing.

The whole disc is a riveting listen: I do urge you to buy it.

[Violin Concerto] Sawyers’ voice is tonally based, but in a way which is sometimes reminiscent of Rubbra; the finale holds a beautiful, long-breathed melody, superbly given here by Sitkovetsky, whose playing throughout is exemplary. The Valley of Vision, inspired by painter Samuel Palmer, is heard in a radiant account; clearly in the English Pastoralist vein, it offers both sweet repose and an intense climax. If the trumpet concerto is less memorable as a piece, the Elegiac Rhapsody for trumpet and strings, in memoriam John McCabe, is powerful.