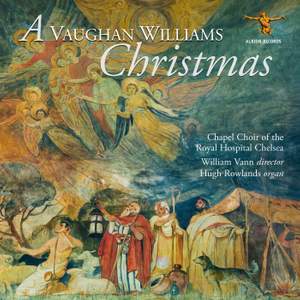 8 Traditional English Carols: No. 1, And All in the Morning

8 Traditional English Carols: No. 4, Down in Yon Forest

8 Traditional English Carols: No. 6, The Truth Sent from Above

8 Traditional English Carols: No. 7, The Birth of the Saviour

Vaughan Williams: Snow In The Street, "From Far Away we Come to You"

William Vann talks to David about a new album recorded by the Chapel Choir of the Royal Hospital Chelsea, devoted entirely to Christmas works by Vaughan Williams and featuring a number of world-première recordings.

Vaughan Williams was (with Cecil Sharp) one of the foremost collectors of folk songs from 1903, and collected many traditional carols as well. This collection is of carols as he arranged them, thus presenting his view of Christmas in the first half of the 20th century. He also wrote four completely new carols for the Oxford Book of Carols (tracks 12 to 15). The recording concludes with the first complete recording of Nine Carols for Male Voices, commissioned by the British Council in 1941 for performance by and for British troops serving in Iceland. Nearly half of the recording is accounted for by world première recordings. The recording was made in February 2018 in St Jude-on-the-Hill, Hampstead. William Vann directs the Chapel Choir of the Royal Hospital Chelsea. Hugh Rowlands accompanies 13 of the 24 tracks on the church's Willis organ. An earlier release with William Vann as Director of Music, SOMMCD0161 Carols from Chelsea, earned critical press acclaim, Gramophone commenting on the 'first-class personne'l an 'tension and subtlety in the performances'.

A dark-toned, introspective harmonisation of ‘Coventry Carol’ and a jaunty ‘I Saw Three Ships’ stand out particularly. Clear-toned, welcoming performances.

No extraneous emotive buttons are pushed on A Vaughan Williams Christmas…All in all, it’s very sober fare for Christmas – dry even – but it is impossible to dismiss given its content, its neat performances from the Royal Hospital Chapel Choir and its thorough academic contextualisation.