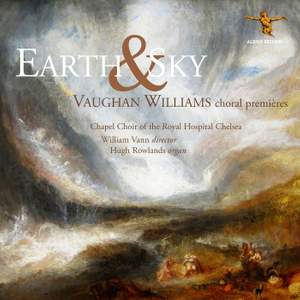 A group of folk song arrangements elicits breezy, rhythmically engaging performances from the Royal Hospital singers…Vann’s conducting is both energising and unobtrusive, and the sound is pleasingly... — BBC Music Magazine, November 2018, 4 out of 5 stars More…

Vaughan Williams: 3 Vocal Valses from the Songs of the Wrens

trad.: The world it went well with me then (arr. R. Vaughan Williams for choir)

Vaughan Williams: Little Cloister (As the disciples, when Thy Son had left them)

Vaughan Williams: A Hymn Of Freedom

Vaughan Williams: A Call To The Free Nations

Vaughan Williams: A Song of Thanksgiving: Land of Our Birth

Dawn on the Hills (Arr. R. Vaughan Williams for Choir)

Albion Records is pleased to present fourteen choral works written by Ralph Vaughan Williams and a further eight arrangements made by him between 1896 and 1954 ? very nearly the length of his working career. 21 of the 22 tracks are world première recordings (we were pipped to 'O Praise the Lord of Heaven' by a June 2018 release!)

The recording was made in February 2018 in St Jude-on-the-Hill, Hampstead. William Vann directs the Chapel Choir of the Royal Hospital Chelsea, and plays the piano for four tracks. Hugh Rowlands accompanies a further 9 tracks on the church's Willis organ.

An earlier release with William Vann as Director of Music, SOMMCD0161 Carols from Chelsea, earned critical press acclaim, Gramophone commenting on the 'first-class personnel' and 'tension and subtlety in the performances.'

A group of folk song arrangements elicits breezy, rhythmically engaging performances from the Royal Hospital singers…Vann’s conducting is both energising and unobtrusive, and the sound is pleasingly natural and well balanced. None of the music here is indispensable Vaughan Williams, but it has enough interest to more than justify the recording.

The chamber-sized Choir of the Royal Hospital Chelsea and their director William Vann bring the highest level of commitment to the project. Hats off to them, and to the RVW Society for making it possible.

Albion Records serves up another treat for all Vaughan Williams fans: over an hour’s worth of choral fare encompassing an agreeable variety of genres in conspicuously accomplished premiere recordings…these are winningly communicative, admirably disciplined readings…A job well done!