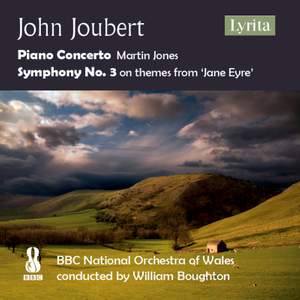 Although none of the movements is based on traditional symphonic forms, there is a powerful cogency to Joubert’s writing that underlines its dark-hued intensity. Boughton shapes the surging phrases... — Classical Music, August 2018, 5 out of 5 stars More…

January 1959 in the Free Trade Hall, Manchester. In keeping with Joubert’s instinctively symphonic approach to large-scale forms, the concerto is more of a sinfonia concertante than a bravura vehicle for pianistic display. The idea for a musico-dramatic work based on Charlotte Brontë’s novel Jane Eyre originated in the early 1980s, when the composer took early retirement from the University of Birmingham. This was a labour of love which he embarked upon unprompted and without the security of a commission. Dedicated to the opera’s librettist Kenneth Birkin and his wife Inge, Symphony No.3 on themes from the opera 'Jane Eyre', Op.178 (2014-17), reworks the five orchestral interludes as five symphonic movements. Originally written for chamber orchestral forces, the material has been re-scored by the composer for a full symphony orchestra.

Although none of the movements is based on traditional symphonic forms, there is a powerful cogency to Joubert’s writing that underlines its dark-hued intensity. Boughton shapes the surging phrases impeccably; climaxes have a natural inevitability. Dedicated to and premiered by Eso Elinson, Joubert’s 1958 Piano Concerto unfolds on a large scale, muscular in its outer movements. The orchestra’s role is prominent, with Martin Jones a sure soloist. Rewarding listening.