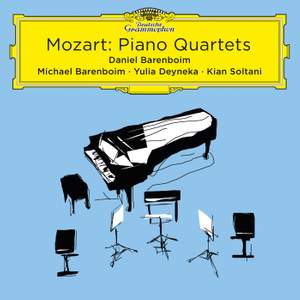 There is no question from the start of the guiding force here: Daniel Barenboim, a great Mozart player early in his career, and once more now, manages to hold things together while being free... — BBC Music Magazine, November 2018, 5 out of 5 stars (Performance) / 4 out of 5 stars (Recording) More…

The second album set for release this summer represents Barenboim’s Chamber Music series with a wonderful ensemble: Yulia Deyneka who works as professor at the Barenboim-Said Academy and is the principal viola of the Berlin Staatskapelle. Michael Barenboim, who is Maestro Barenboim’s son, an acclaimed violinist and West-Eastern Divan’s concert master. And DGs newly signed cellist, Kian Soltani who’s debut album ‘Home’ was released earlier this year.

There is no question from the start of the guiding force here: Daniel Barenboim, a great Mozart player early in his career, and once more now, manages to hold things together while being free with rubato and altogether spontaneous, so that this is quintessential chamber music-making…One of the many delights of these performances is that they recognise the intimate and non-portentous nature of the works.

The years of collaboration between these players (and the fact that the violinist is [Barenboim’s] son) show in the chamber interaction between them; Barenboim’s default piano mode can be to play to the back of the hall at all times but here he reins in his playing with a naturalness borne of such a long involvement with the composer. For truly sensitive piano-playing, try the E flat Quartet’s slow movement or the development of the opening Allegro.

Characterful, congenial performances from Barenboim and three alumni of the West-Eastern Divan Orchestra (including his violinist son, Michael) – the tuttis have a big-boned, near-orchestral quality, but there’s no lack of delicacy when required. The pianist is very much Master of Ceremonies in the concerto-like opening of the G minor Quartet, but knows exactly when to take the spotlight and when to recede.

Where many make a simplistic distinction between the pieces — the G minor is darkly dramatic, the E flat, K493, relaxed and convivial — the truth is more complex, and these players respond accordingly...Barenboim’s piano command is elegance itself, and his colleagues play with mature imagination.