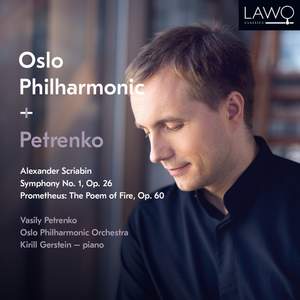 Never discursive or splashy, Petrenko’s forensic view of the composer may not please those brought up on Soviet-era music-making but I found it very persuasive. — Gramophone Magazine, November 2018 More…

Once again pairing the winning combination of Gramophone's 2017 'Artist of the Year' Vasily Petrenko, the Oslo Philharmonic and pianist Kirill Gerstein together, Lawo Classics is delighted to present the last instalment of their critically acclaimed Scriabin Series. They are joined on this recording by the Oslo Philharmonic Choir (Prometheus) and soloists Alisa Kolosova and Alexey Dolgov.

Vasily Petrenko is one of the most significant and galvanizing musicians alive. He became famous for his transformative work at the Royal Liverpool Philharmonic, the oldest orchestra in the United Kingdom, where he refashioned the orchestra's sound, reconnected the organization to its home city and presided over a huge increase in ticket sales. He quickly came to represent a new generation of conductors ready combine their uncompromising artistic work with a passion for communication and inclusion.

Vasily is one of the most acclaimed classical recording artists alive and has won numerous accolades for his recordings of Russian repertoire, including two Gramophone awards. With the Oslo Philharmonic, he has recorded Shostakovich and Szymanowski concertos, "Romeo and Juliet" by Prokofiev, and a major new cycle of orchestral works by Alexander Scriabin, of which this release is the last in the series of three CDs.

Kirill Gerstein's curiosity and versatility has led to an intense engagement with a wide range of repertoire and styles. From Bach to Adès, his playing is distinguished by its clarity of expression, discerning intelligence and virtuosity. Gerstein's energetic and imaginative musical personality has taken him rapidly to the top of his profession.

"Gerstein and Petrenko are outstanding?." The Arts Desk on Scriabin Symphony No 2 (LWC1139)

"This is a highly recommendable version of the concerto?" Musicweb International on Scriabin's Symphony No 2 (LWC1139)

Never discursive or splashy, Petrenko’s forensic view of the composer may not please those brought up on Soviet-era music-making but I found it very persuasive.

The lion’s share of the solo work in [the First Symphony] falls to the woodwind, and the principal clarinettist who so impressed James in the orchestra’s recording of the Second Symphony is the star of the show once again in the Tristanesque stretches of the long third movement in particular...The Oslo Philharmonic Choir sing with such conviction that even Scriabin’s slightly toe-curling purple prose about the transcendent nature of art comes across with a certain dignity...Petrenko brings often astonishing clarity to a score which can easily seem overblown.

Petrenko and his orchestra certainly do their best to tease out the teeming, tumbling textures of the First Symphony, but, with Kirill Gerstein as the solo pianist, it’s their performance of Prometheus, one of Scriabin’s greatest achievements, that stands out. It is filled with flickering detail, ricocheting between piano and orchestra, to create the febrile, trill-filled world so instantly identifiable as that of late Scriabin.