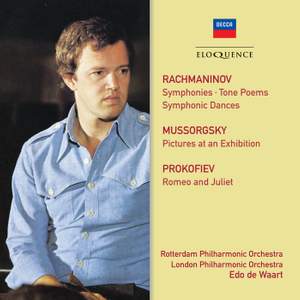 Mussorgsky: Pictures at an Exhibition (Orch. by Maurice Ravel)

9. Ballet of the Chickens in Their Shells

11. The Market-place at Limoges

Dance of the maids

Romeo and Juliet before parting

‘In my profession,’ remarked Edo de Waart in a 1990 interview, ‘you need the affrontery to believe you have an alternative with something to say that isn’t already being said. Without this sort of gall 95 per cent of us should quit.’ His intensely practical and dynamic approach was formed by experience as an orchestral oboist, taught by the principal oboe of the Concertgebouw Orchestra in the days of Willem Mengelberg, nurtured by seeing Eduard van Beinum in action and further encouraged by Bernard Haitink: de Waart has the history of the Concertgebouw running through his veins. ‘I think people regarded me as a second Mengelberg, and I was very sure that I wasn’t.’ However, it was as chief of the rival Rotterdam Philharmonic that the conductor made his mark, in a series of recordings for Philips that played to his strengths in Romantic repertoire.

The conductor had earlier confessed to an initial reluctance to engage with the idiom of Rachmaninov. ‘Then I conducted the [Symphonic Dances] in Rotterdam several times, and suddenly I became very fond of it. I think his music grows on you as you get rid of the “honey and roses” view of him that you first learn. You must play him as strongly as the Russians used to do.’ In fact he recorded the Symphonic Dances with the London Philharmonic in 1972, but the following year he made his debut LP in Rotterdam with a personal, LP-length selection of excerpts from Prokofiev’s ballet Romeo and Juliet. There followed in December 1974 the Mussorgsky Pictures and then these powerfully built, authentically volatile accounts of the Rachmaninov symphonies between 1976 and 1978: recordings that made de Waart’s reputation and still stand up well to the competition today.

‘The Philips engineers, working in the Rotterdam orchestra’s fine de Doelen hall, have gone out of their way to provide sound that is not just spectacular but wonderfully weighted and rounded.’ Gramophone, November 1975 (Mussorgsky)

‘Edo de Waart’s reading is attractively volatile, bringing out the music’s freshness. With generally fast tempi the effect is emotionally lightweight, although the slow movement is very beautiful and the refined orchestral playing is naturally expressive throughout. The recording is full and well balanced.’ Penguin Guide to Records, 1982 (Symphony No.2)