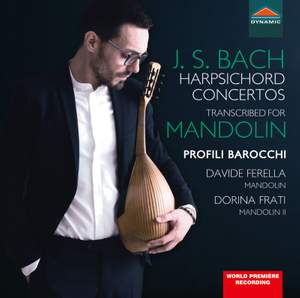 Bach was a great transcriber and arranger of both his own works and those of other composers, something that is eloquently demonstrated in his output. For example, there are 6 concertos for organ (BWV 592-597) and 16 concertos for harpsichord (BWV 972-987), all transcribed from works by other composers. Bach generally favoured works by contemporary Italian composers for his transcriptions, including Vivaldi, Albinoni, Alessandro and Benedetto Marcello, Bonporti and others. On this album, the Italian mandolinist Davide Ferella has himself taken four of Bach’s concertos for one and two harpsichords and arranged them for one and two mandolins, strings and basso continuo. Davide Ferella handles these transcriptions with both deftness and respect for Bach’s originals, sometimes assigning passages to the strings that were originally for the harpsichord, in order not to lose any of the rich contrapuntal texture of Bach’s writing.