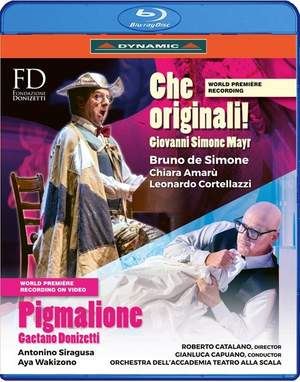 Donizetti was just 19 when he composed Pigmalione and it was only premiered in 1960. Frankly the pupil out-masters his teacher…Siragusa is magnificent as Pygmalion, begging the gods to bring... — BBC Music Magazine, November 2018, 4 out of 5 stars (Pigmalione) / 3 out of 5 stars (Che originali!) More…

Pigmalione was Gaetano Donizetti’s first opera, written to a libretto by Simeone Antonio Sografi in just two weeks when he was 19. Donizetti himself defined Pigmalione as a 'lyrical scene'. It was his only work to be based on a mythological subject and tells the story of a sculptor whose statue comes alive. The main role is sung by Antonino Siragusa, who gives a masterful interpretation with his polished and colourful voice, especially in the substantial recitatives. Japanese soprano Aya Wakizono gives an excellent performance in the role of Galatea, her enticing voice well suited to the demands of the short part. Che Originali! is a little-known, one-act farce based on a libretto by Gaetano Rossi. It immediately established itself as one of the most successful operas by Giovanni Simone Mayr, who was Donizetti’s teacher. The opera tells the story of a music fanatic, Don Febeo, who insists that, in his house, everybody must know and love music. The role of the protagonist, Febeo, is performed by Bruno de Simone, an excellent actor with a clear, precise voice, and a master of rapidly articulated passages.

Donizetti was just 19 when he composed Pigmalione and it was only premiered in 1960. Frankly the pupil out-masters his teacher…Siragusa is magnificent as Pygmalion, begging the gods to bring his sculpture to life in a vocally demanding role. Aya Wakizono makes a touching Galatea – not that she has a great deal to do, although she does it decoratively.

The music is attractive, with some delicate writing for the woodwind. Gianluca Capuano conducts both operas with spirit. Well worth investigating.

[Che originali!] is a clever little piece with a score to match and comes over well in Roberto Catalano’s staging, with modern-dress (if distinctly wacky) costumes by Ilaria Ariemme. Bruno de Simone gives an expert buffo performance as Don Febeo…[Pigmalione] covers a surprisingly wide emotional range with total assurance.