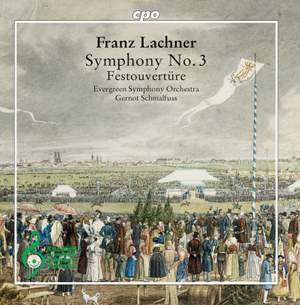 [Schmalfuss] deserves considerable praise for bringing such commitment and affection to the performances throughout. His conducting and the lively, engaging playing of the Evergreen Symphony... — Gramophone Magazine, Awards Issue 2018 More…

Franz Lachner's work catalogue registers almost two hundred opus numbers representing practically all the important musical genres. CPO present world premiere recordings of two of his symphonic works. Lachner composed his Symphony No. 3 between the spring of 1833 and April 1834, and after its premiere it was enthusiastically received and reviewed. The Vienna correspondent of the Leipziger Allgemeine Musikalische Zeitung celebrated the work emphatically as the "bold product of an imagination of youthful fire moderated by the laws of eternal truth and beauty." The Festive Overture in E flat major, which remained unpublished, is dated "22 February 1864" in the autograph. Although the autograph does not indicate a specific occasion for the Festive Overture, its composition might have had something to do with the wedding of Emperor Franz Joseph I of Austria and Duchess Elisabeth of Bavaria ("Sissi"). A recording marking the rediscovery of an important German composer of the nineteenth century.

[Schmalfuss] deserves considerable praise for bringing such commitment and affection to the performances throughout. His conducting and the lively, engaging playing of the Evergreen Symphony Orchestra, though occasionally lacking in polish, help bring the symphony, in particular, enjoyable back to life.

The sound reproduction provided by CPO is vivid and well balanced.