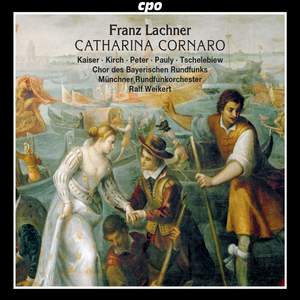 The score’s final scene contains some its most engaging music…Elsewhere the easy melodies flow in a musical language that offers an appealing mixture of early grand opera and Weber and Schubert…Kristiane... — Gramophone Magazine, Awards Issue 2018 More…

At a time when the majority of German composers turned from the opera to the singspiel, Franz Lachner continued the tradition of the grand historical opera with Catharina Cornaro. The once successful opera, last performed in Munich in 1903, was forgotten for many decades, but a few years ago the editor Volker Tosta of Stuttgart prepared a new edition of this work, its first published version, especially for the concert performance by the Munich Radio Orchestra. The action of the tragic opera is based on the true-life story of the Queen of Cyprus. It is hard to believe that this musically appealing work, which captivated the audience at Munich's Prince Regent Theater already with its highly atmospheric overture during the performance on which this CD is based, ever could be forgotten. Max Zenger's Geschichte der Munchner Oper of 1923 documents the groundbreaking effect of this opera when it states that Catharina Cornaro had "quite literally become Munich's hallmark, like the two towers of the Cathedral of Our Lady."

The score’s final scene contains some its most engaging music…Elsewhere the easy melodies flow in a musical language that offers an appealing mixture of early grand opera and Weber and Schubert…Kristiane Kaiser is persuasive in Catharina’s music, and Daniel Kirch deal with the challenges of Marco well – it’s one of those tricky roles, by the sound of it, that sits between lyricism and proto-Heldentenor heroics.

Lachner proves to be an entirely skilful composer, well able to mount a piece of the scale of a French grand opéra in a musical styles that owes a good deal to such figures as Weber and Mendelssohn…Kaiser is effective in the title role, though ideally a touch more weight is needed…Kirch handles the role of Catharina's true love Marco with plenty of heft and some panache...With a first-rate orchestra plus a musicianly radio choir at his disposal, the conductor Ralf Weikert makes a good sales pitch for this forgotten piece.